Norway may have extensive sea areas, but conflicts nevertheless arise over their use. Co-existence is vital if several industries are to exploit the potential of these waters.

Lisbet Jære
The article was updated more than 3 years ago

The petroleum and fishing sectors are those which most frequently find their interests clashing, with seismic surveying as the primary battleground because it takes a lot of space.

“We’re asked to comment on applications for such surveys,” explains development section head Anne Kjos Veim in the resource management department at the Norwegian Directorate of Fisheries.

“But a number of considerations must be taken into account, and it can often prove difficult to avoid seismic shooting near fishing grounds even if we advise against it.”

BarentsWatch has collaborated with the agencies over the FiskInfo project to make information available for automatic and manual download to chart plotters.

Fishermen can access petroleum-related information from the NPD on subsea installations as well as planned and current seismic surveys.

These operations involve generating sound waves which bounce back from sub-surface strata and are recorded by hydrophones attached to long cables called streamers. Towed behind the survey ship, these are several kilometres long.

The aim is to identify the location of petroleum deposits or to monitor reservoirs on producing fields in order to optimise recovery of their oil and gas.

An appendix to the management plan for the North Sea and Skagerrak from the fisheries directorate is devoted to seismic surveying.

This notes that conflicts with the oil industry have increased in step with the expansion in these investigations, and that the directorate is dissatisfied with the prevailing rules of conduct.

But Jan Stenløkk at the Norwegian Petroleum Directorate (NPD) does not think conflict is that extensive. “We only use that term when the Coast Guard gets called in, which happens very seldom – a few times a year.

“Many disputes build on poor information and misunderstandings. Things have improved since seismic survey ships were required by law to carry fishery experts.”

Nevertheless, Stenløkk would like to have seen these experts get more training in legal and regulatory provisions and an improvement to the flow of information between various industries.

A requirement for satellite tracking of all fishing vessels would make it easier to assess the actual level of activity. Under present conditions, decisions have to be based on assertions from various quarters which are difficult to verify.

“We also hear from the fishery organisations that the boats don’t go out when seismic shooting is under way because their owners think it has a negative effect on the fish,” says Stenløkk.

“But that’s difficult for us to accept, because it’s not documented. Acquiring such evidence is also important for the fishermen, since they can then claim compensation because their fishing grounds have been denied them.”

According to fisheries directorate, putting to sea if the fish have been frightened off would yield the direct loss of both working time and expensive fuel.

The ability to seek compensation is all well and good, but this is an uncertain option for many fishermen because they must apply and it takes time for a possible payout to reach them. Some may also feel that their full loss is not covered.

The Norwegian Institute for Marine Research has conducted two major research projects on the way seismic surveying affects catches. These show that the airguns used to generate sound waves do scare away fish.

Asked whether studies have been conducted on this effect and other harm to fish from seismic shooting, Veim says that one was conducted with cod and haddock as far back as 1992.

The Institute of Marine Research has conducted two studies into the effect of seismic shooting on fish catches. Both give clear indications that fish react to the noise of the airguns.

Carried out on the North Cape Bank in 1992, the first study registered reduced catches out to a distance of 18 nautical miles from the area where the survey ships had worked.

The decline was 70 per cent within an area of three to 10 nautical miles, and numbers had not recovered within five days. That was attributed to the fish being scared out of the area.

A second study was carried out off Vesterålen in 2009, which revealed a big increase in net catches of redfish and Greenland halibut after seismic shooting.

According to the scientists, this was because the fish had become stressed and reacted with increased swimming activity which made them more vulnerable to being netted.

Line catches of these two species declined, but not to any extent.

The conclusion was that seismic activity could lead to both bigger and smaller catches, depending on species, gear and type of survey.

However, the 2009 study took place at a time of year when little cod was present.

Petroleum can be sought on the Norwegian continental shelf (NCS) with a licence for either exploration or production. See sections 2-1 and 3.3 of the Petroleum Act.

Exploration licences are awarded by the NPD, normally for a year at a time, while the Ministry of Petroleum and Energy issues production licences for an initial period of up to 10 years with opportunities for extension.

Before a survey begins, the licensees submit a plan to the NPD, the fisheries directorate, the Institute of Marine Research and the Ministry of Defence.

The NPD collects feedback from the other institutions which give technical advice on military activity, fishing operations, spawning periods and so forth in relation to the proposed survey.

On the basis of these responses, the NPD makes recommendations to the licensees. It will normally advise that the input from the other agencies be taken into account.

The NPD can also set conditions for the way it expects the survey to be conducted. That will usually relate to fishing operations which might be under way or initiated during the proposed shooting in order to avoid conflicts.

A survey will then be announced on the NPD’s website in a reporting system developed in consultation with the Norwegian Fishermen’s Association.

“We clearly need additional and updated documentation which also covers other species. We know that fish have very good hearing, but little about the scare effect of airguns.”

Stenløkk agrees that more research is needed: “This type of study is complex and expensive. There’s agreement on a scare effect, but not on its scale.”

According to the 1992 project, conducted on the North Cape Bank off northern Norway, seismic shooting can frighten cod and haddock up to 18 nautical miles away.

The study covered the continuous discharge of airguns over a relatively restricted area, while such activity would normally be in motion across a wide region.

This means the impact would not be experienced as constant at a small distance. What happens over a larger area was investigated in the Vesterålen study further south.

More information is also needed about how long the scare effect persists after shooting. In any event, a requirement for a minimum distance of 19 nautical miles regardless of fish species would put an effective stop to seismic shooting off Norway.

The North Cape study only provides a basis for saying something about the scare effect on cod and haddock.

Norway has possessed three management plans for its sea areas over the past decade, covering the Barents Sea and Lofoten, the Norwegian Sea, and the North Sea and Skagerrak.

The last of these is the part of Norway’s exclusive economic zone with the greatest human activity as well as the smallest area, and thereby the largest number of clashes.

“We were more concerned about conditions earlier,” says Veim. “Dialogue has improved both with the NPD and not least with the oil companies.”

Both she and Stenløkk believe that work on the management plans, which brought the industries together, has led to better dialogue and greater mutual understanding.

Work on these plans is led by the Norwegian Environment Agency (NEA), where Eva Degré heads the marine section. “A focus on especially valuable and vulnerable areas is particularly important for us,” she observes.

“The plans provide a tool for an ecosystem-based approach to managing our sea areas. The climate perspective also occupies a key place in this context.”

From the NEA’s perspective, co-existence between different marine activities in the waters off Norway involves a relatively low level of conflict.

“Norway is fortunate in having big sea areas and long experience as a maritime nation,” says Degré. “The potential for conflict rises when the opening of an area to new activity is under consideration. Disagreements in such cases usually reflect differing views of what’s valuable.

“We’re a strong proponent of identifying what’s needed to ensure a good environmental condition before a new activity can start. This could clash with the interests of other industries.”

One example of a conflict both between industries and between commercial operations and environmental values was the proposal to hunt for petroleum off Møre and Lofoten.

Veim believes that signs can be seen of growing disagreements in the eastern Barents Sea after new areas were opened to oil activities following the boundary treaty signed by Russia and Norway in 2010.

Co-existence problems between petroleum and fishing have so far dominated off Norway. But a number of potential conflicts related to aquaculture expansion also exist along the coast.

Shipping channels also lay claim to space in these areas. Another field where battles are so far potential rather than actual is the installation of offshore wind turbines.

“Wind farms are planned on fishing grounds and banks, where seabed conditions favour their construction,” reports Veim. “These will also occupy more space than oil platforms.

“We know little about the possible effects on fish of lights and vibration from wind turbines. Since few projects of this kind have been realised in Norwegian waters so far, it’s not a problem at the moment.”

She says that conflicts with aquaculture development have presented no challenges so far. Fishing interests have been taken into account, and efforts made to locate facilities away from fishing and spawning grounds.

If competition over space begins to emerge, however, this industry represents a potential for conflict in the longer term. 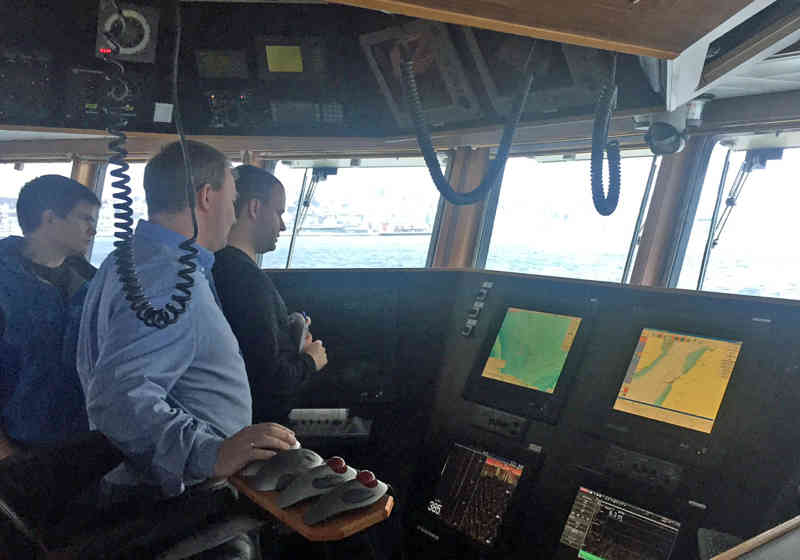 Norway’s fishermen can now get official information directly on their chart plotter with the FishInfo service. Launched by the Norwegian Seafood Research Fund (FHF) and BarentsWatch, this aims to provide the right data at the right time in the right channel.

The competition for the sea

Norway has the world's second-longest coastline, and manages an ocean area that is more than six times larger than mainland Norway. Nevertheless, different desires and needs for use of the sea may give rise to conflicts.
BarentsWatch does user-driven, agile development. In order for our services to be useful and user friendly, we would like feedback from you as a user. It can be in the form of complaints or compliments, questions, ideas, and other issues of relevance. We greatly appreciate your help.
Feedback