Norwegian oil and gas pipelines crisscross the bottom of the North Sea like so many underwater motorways. The question now is how this system can keep abreast of new discoveries off Norway.
Arvid Steen
The article was updated more than 3 years ago

The total length of the transport network is just over 9 300 kilometres, or roughly the distance from Oslo to Cape Town. That includes 7 400 kilometres of export pipelines – primarily for gas.

Gas from the Norwegian continental shelf (NCS) plays a key role in European energy supply, and is sold to all the big consumers in western Europe.

The NCS currently meets 17 per cent of gas requirements in the EU’s 26 member nations, and 30-40 per cent in the three largest recipients – Germany, France and the UK. Russia remains the largest gas supplier to western Europe, but Norway occupies a solid second place.

Gas accounts for an increasing share of Norway’s petroleum production, and provides substantial revenues for the government – totalling NOK 70 billion alone in 2011. Half the volume produced is exported, and about 40 per cent gets injected into oil fields to boost recovery. Most of this can be recovered later. Only 3.5 per cent of the gas is used at home.

The gas pipeline network is operated by Gassco, a state-owned not-for-profit company which serves a total of 30 suppliers to the rest of Europe.

Estimated investment on the NCS in 2013 is some NOK 194.3 billion, including NOK 35 billion for exploration. That compares with a Norwegian gross domestic product of NOK 2 601 billion in 2011.

The biggest development spending in 2013 is expected to be on Goliat in the Barents Sea, Eldfisk II in the North Sea and the recently approved Edvard Grieg project in the same waters. Generally speaking, exploration on the NCS is steadily moving further north towards the Barents Sea.

The high level of investment on the NCS raises the question of how the gas and oil are to be landed – by extending the pipeline network, or using ship-based transport. Gassco has submitted a major study to the Ministry of Petroleum and Energy which includes an assessment of opportunities and conditions for laying a gas pipeline from the Barents Sea. This could be tied into the existing transport network from the NCS, and would be important for maintaining Norway’s position as a stable gas exporter to Europe.

Should signals from the Europeans indicate that they do not want large gas deliveries in coming years, however, an option would be to liquefy the gas and ship it to Asia, for instance. Some would prefer a new gas liquefaction plant at the Hammerfest LNG facility on Melkøya in northern Norway to supplement the Snøhvit reception and processing facilities there. They fear that a gas pipeline would leave the northernmost county of Finnmark as no more than a raw material producer. Expanding gas liquefaction would create further jobs. On the other hand, the local North Energy oil company has argued strongly for a pipeline which also has the capacity to transport gas from new discoveries.

Current forecasts indicate that Norwegian gas production will begin to decline after 2020. That depends on the number and size of future discoveries. Great expectations attach to exploration in the Norwegian sector of the Barents Sea, where extensive drilling is planned in coming years.

At the same time, new parts of the NCS are expected to be opened for exploration, including the former area of disputed claims adjacent to the Russian Barents Sea sector.

Financed by 11 oil and gas companies, the Norwegian Sea gas infrastructure (NSGI) project envisages a 500-kilometre pipeline from the Aasta Hansteen discovery to Nyhamna in mid-Norway.

This would connect with the existing Langeled pipeline to the UK, which has spare capacity, but calls for expansion and new technical solutions at the land-based receiving terminal. In addition, the project envisages possible tie-ins with future Linnorm and Zidane developments, as well as a link with the Åsgard Transport line to Kårstø north of Stavanger.

Gassco has recommended that gas from Aasta Hansteen, Linnorm, Zidane and other Norwegian Sea discoveries be piped to Nyhamna, where substantial investments have already been made. Studies by the pipeline operator are intended to identify solutions which help to optimise value creation from Norway’s petroleum resources. Infrastructure is crucial in this context.

The map below provides an overview of gas (red) and oil (green) pipelines on the Norwegian continental shelf. 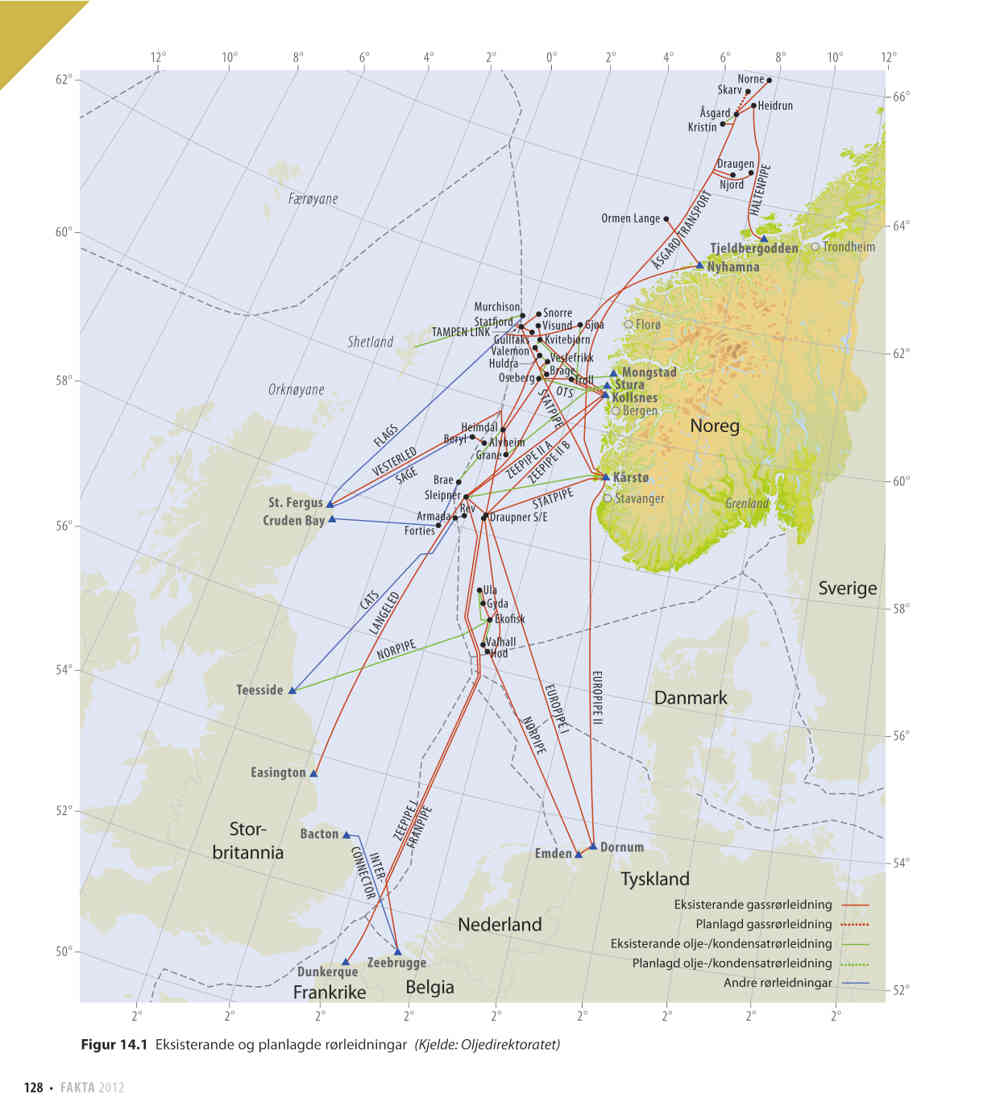 Oil and gas
BarentsWatch does user-driven, agile development. In order for our services to be useful and user friendly, we would like feedback from you as a user. It can be in the form of complaints or compliments, questions, ideas, and other issues of relevance. We greatly appreciate your help.
Feedback